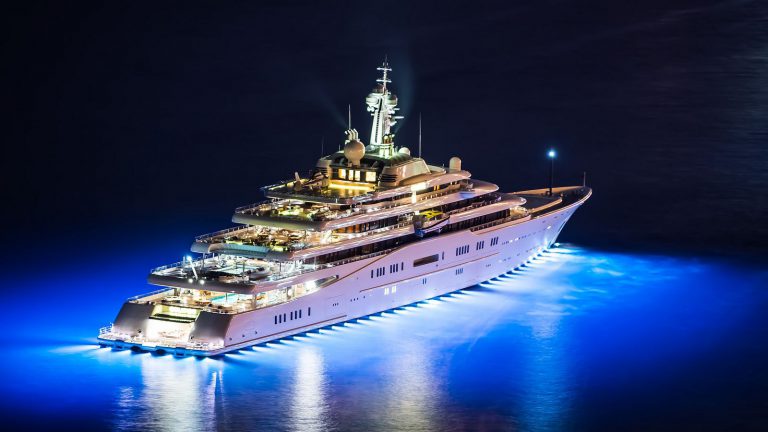 The world’s billionaires are not afraid to spend their immense wealth on extravagant purchases. So for Roman Abramovich, the businessman, politician, and owner of Chelsea Football Club, one superyacht was not enough– he has now bought a second luxury vessel.

The Eclipse megayacht is the most expensive and luxurious yacht in the world, worth $1.5 billion with 17 luxury guest cabins and a first-class master suite that’s protected by bulletproof glass. The ship has state-of-the-art amenities such as an anti-missile defense system (worth $50 million) which protects against paparazzi laser shields to protect privacy ($150k), costing up to $75 million per year for upkeep while renting it costs upwards of $2 milion each week!

Part of the boat holds a helicopter and a garage, while the swimming pool and sundeck can be found on level 8. Level 7 has a pool with an atrium as well as an open deck on it. The salon, main dining hall, and a 40ft X 60ft full-beam loggia live on level 6.

The second level of the yacht divides the cabins and suites of the owner, guests, and crew. The first level accommodates a docking port for a submarine. And, on the third floor, there’s an engine room as well as machinery and a small disco club.

The Eclipse is also equipped with three launch boats that can be used to travel to nearby beaches, and the yacht has a 16 meter swimming pool that can transform into a dance floor. Clearly the owner likes to party.

This vessel also includes a mini-submarine capable of diving 250 ft below sea level into waters only accessible through extreme depths.

It doesn’t stop there. The Eclipse also flaunts internal lifts, six tenders, and an exterior fireplace on-board. The boat also features a place for a three-person private submarine that can go up to a depth of 160ft.

The Eclipse yacht is also one of the most technologically advanced yachts in the world. Safety features include motion sensors, bulletproof glass, and an anti-ballistic missile defense system.

Built by Fincantieri and Visentini, Eclipse is a private yacht that can accommodate up to 16 guests. This luxury ship features a Jacuzzi and spa on each cabin, as well as anti-paparazzi security systems.

Keeping the Eclipse in good shape is a high-maintenance endeavor. It reportedly costs an annual expense of over $60 million to maintain this lavish boat. Media reports say you need to pay $250,000 for the luxury vessel if you want to rent it for a day.

Signals in the dark: Cryptocurrency trading based on Dark Web trends

Zeen is a next generation WordPress theme. It’s powerful, beautifully designed and comes with everything you need to engage your visitors and increase conversions.